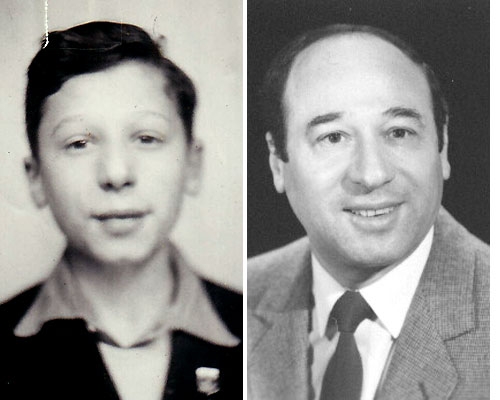 Because some things are too painful to remember, neither Paul Rak nor his sister, Micheline, recalls some aspects of their lives under the Occupation in France. For this reason, they have no particular recollection of their photos being taken but believe they were taken no later than 1945 or 1946.

Paul and Micheline’s parents arrived in France from Poland in the 1920s. Their mother, Feiga Henelda, was born in Lublin in April 1898, and their father, Aaron (André), was born in Lubartów and was younger than his wife. Aaron Rak already had some half-brothers living in France and working as furriers. They helped him to get settled and provided him with a job. Feiga, who also had a brother in France, worked as a seamstress for a furrier in Paris. Aaron and Feiga married in 1930. Aaron studied at the Organisation Reconstruction du Travail (ORT) in Paris and later worked in the advertisement division of the department store Au Bon Marché. But in 1936, he joined a union, and in 1938, Aaron was fired due to his union activities.

Unlike Aaron, who spoke and wrote French beautifully, Feiga did not speak French very well and spoke Yiddish with her husband. When Aaron obtained French citizenship, Feiga received it as well by marriage.

The Rak family lived at 74 rue de Charonne in the 11th arrondissement. In 1941, the concierge of the building told the French police they would find Jews living on the first floor. Aaron was then arrested and sent to Drancy where he connected with some cousins. In November of the same year, Aaron was liberated from Drancy because he was sick. He came back home and passed away five hours later. At this time Paul was in the Sarthe region and Micheline was in Lyon. Their mother sent a telegram to Paul asking him to come back for his father’s funeral in the Bagneux cemetery.

Later, the two siblings stayed in the Sarthe with a farmer, Mrs. Woitasky, who was originally from Poland. She was not married and had adopted a child. Paul and Micheline went to school in Sillé-le- Guillaume in the Sarthe under the false last name Barbier. Paul and Micheline never saw their mother while they were in hiding. Mrs. Woitasky probably received money from an organization to take care of the two children. The siblings believe they were helped by the Jewish organization Colonie Scolaire – Rue Amelot, which might have intervened to send them to the Sarthe. 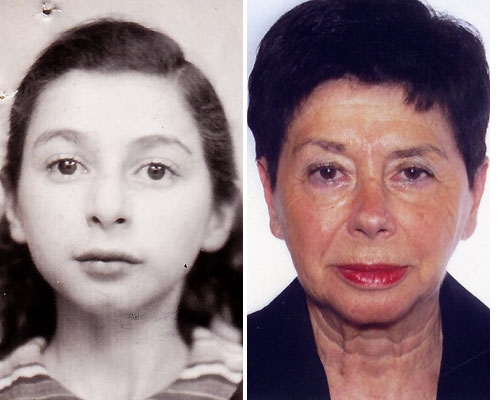 Micheline remembers that before going to the Sarthe, her mother handed her over to a man wearing a coat and a hat at the Gare de Lyon train station in Paris. He took her to Lyon, where she stayed with her mother’s cousins and went to school. Micheline does not recall how she returned to Paris and then joined Paul in the Sarthe. However, she does remember that when it snowed in Sillé-le-Guillaume, her feet hurt because of the wooden shoes she was wearing.

During the war, Feiga remained in the same apartment and worked for the Rosinski Brothers, the matzah makers at 42 rue des Rosiers. Feiga had to wear the Star of David on her clothes, but she managed to hide it with her purse.

At the end of the war, Paul and Micheline remember the US planes flying over the village 24 hours before it was liberated. After the liberation, they both went to Paris to stay with their mother. Paul went to school on rue Trousseau and Micheline went to a girls’ school. Paul attended school until the age of 14 and got his Certificat d’Etudes before working as an apprentice for a jewelry maker in Paris. He worked there until he did his military service in Versailles, then in Germany before being drafted for the war in Algeria (1954-1962). While he was in Algeria, Micheline discovered in the newspaper that her brother should never have been drafted for fighting in Algeria because their father was recognized as “Mort pour la France.” She immediately started the paperwork to bring Paul home. Because she did not send the documents to the right place, it took longer than usual. Paul came back three months later and was then sent to Germany instead.

Micheline was eager to study and asked her mother if she could continue attending school. Her mother agreed and Micheline was able to study business and accounting. She received a degree in accounting and started to work.  In 1956, the siblings worked together for an aunt who owned a ready-to-wear business. Micheline was her bookkeeper. Later, Paul worked for another similar business, while Micheline worked as a bookkeeper in a small business in the Sentier garment district in Paris.

In 1968, Paul and Micheline partnered with some cousins to open a ready-to-wear business that stayed in operation until 1996. Paul married in 1963 and has a son and a granddaughter. Micheline married a non-Jewish man.

The two siblings remain very close to each other.