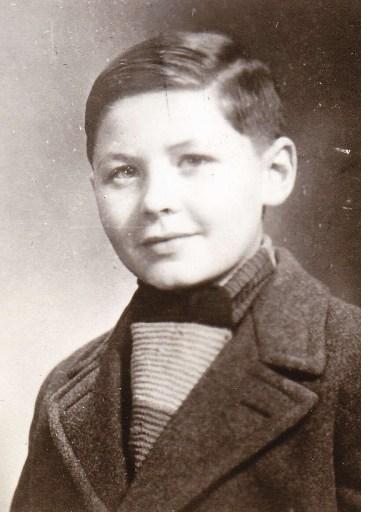 Pierre-Jacques Rojtman died on April 11, 2002. His second daughter, Nina Rojtman, was filled with emotion when she first saw his picture on the Remember Me? website. Until seeing the picture here, she had not even known of its existence. Nina kindly shared with us some information about her father’s life.

Originally called Pinhas-Jaacov Rojtman, Pierre-Jacques was born on July 11, 1936, in Metz, France. His parents were from Poland: his father, Hirsch, from Tarlow and his mother, Bajla (née Zylberberg), from Radom. Pierre-Jacques was their only child.

Hirsch was deported from France to Auschwitz on September 11, 1942. He never returned. Bajla and her sister and son were saved by members of the French resistance, who gave them false papers; their surname was Roche for the duration of the war. They also helped them to find shelter in a small village in Corrèze (Massif Central) called Eygurande. There, the priest helped Pierre-Jacques’s aunt find work as a maid in a castle owned by local nobles. The whole village protected them when German soldiers came in search of Jews and members of the resistance.

On December 6, 1946, Pierre-Jacques became a French citizen and was recognized as a war orphan by the French Republic. Bajla worked hard to make sure that her son could have a good education. During his studies in Clermont-Ferrand, Pierre-Jacques met Danielle Benitah, a fellow student, in 1960. They married the following year and had two daughters: Geneviève, who is the mother of twins, and Nina. Pierre-Jacques became a philosophy teacher before teaching sociology at the University of Toulouse-LeMirail. There, he created the Interdisciplinary Center of Jewish Research and Studies. Pierre-Jacques also worked as a translator and introduced to France American sociologist Louis Wirth’s book The Ghetto.

Bajla passed away in 1978. Pierre-Jacques and his second wife, Michelle Guiraud, adopted a son, Benjamin, who was born in 1991. His aunt, Rivka Dwojra Goldberg, is still living and will be 102 in December 2011.

Nina remembers her father fondly. She tells us he “had a poetic mind.  Though he was a philosopher and a sociologist, he had a secret but huge soft spot for the poets of French Romanticism.  His favorite of them all was Gérard de Nerval; he even had a picture of him in a medallion hanging on the wall in his office.” She also tells us that, though he was melancholic, he had a sharp wit and enjoyed laughing very much.