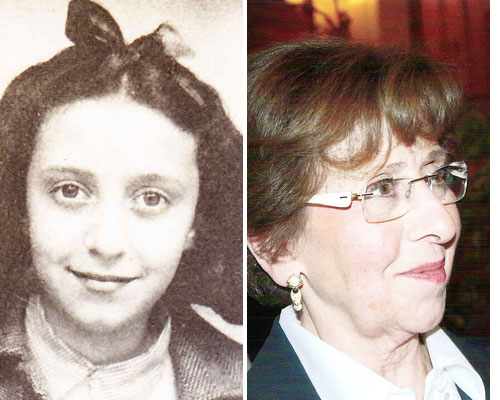 Rachel Psankiewicz had never seen this picture before but believes that it was taken after the liberation when she was about 10 or 11 years old.

Rachel’s parents were born in Warsaw and left Poland for France very early to escape pogroms. They married in Paris in 1928. Rachel’s mother went to France with one of her sisters, while their father (Rachel’s grandfather) had already emigrated to the United States with three of his younger children.

Rachel was born on April 30, 1934, in Paris (12tharrondissement). She remembers her life with her sister (Louise, born in 1929) and her parents in Paris as a wonderful time, and she received much love and attention from her parents. As a little girl, Rachel heard her parents’ friends talking about Hitler and what was happening in Germany. She was exposed at a young age to the danger of antisemitism and taught herself how to read posters announcing the general mobilization without quite understanding what that meant.

Rachel’s father enlisted in the Foreign Legion and fought in the Ardennes and Somme regions.

During the exodus of June 1940, Rachel, her mother, and her sister left Paris with Rachel’s uncle, aunt, and their four children. Along the road, they were bombed by Italian planes but managed to reach Angoulême. Since the Germans were advancing inside French territory, Rachel’s family decided in September 1940 to go back to Paris where they hoped to see Rachel’s father. Rachel’s father was arrested on May 14, 1941, during the first roundup in Paris and was sent to the internment camp of Beaune-la-Rolande in Loiret. Rachel’s mother struggled to support her two daughters. They all visited Rachel’s father in the camp before his deportation to Auschwitz on June 28, 1942 (Convoy 5).

The day before the big roundup of July 16, 1942, in Paris, Rachel believes that her mother heard about it since she hid her and Louise in their paternal grandparents’ apartment, 50 meters away from where they were living. But the concierge denounced them and on July 16, two policemen came to arrest Rachel and Louise. Rachel, her sister, and her mother were all taken to a gathering place (La Bellevilloise) in the 20tharrondissement of Paris. Rachel recalls that many Parisians witnessed the arrests that summer and although some of them seemed to disapprove, others showed their satisfaction with the way the Jews were treated. At this moment, Rachel understood that Parisians were torn about the fate of the Jews. Rachel’s mother knew that she had to act quickly to save her two daughters. She forced Rachel and Louise to escape through the emergency exit. The two sisters went back to their grandparents’ apartment. Their mother was later on sent to Drancy and deported to Auschwitz on July 29, 1942 (Convoy 12).

An uncle of Rachel and Louise sent them to the Union générale des Israélites de France (UGIF) center of “rue Lamarck” in the 18tharrondissement, from which they got out after a while. From this point on, Rachel was separated from her sister and hidden by several people including Catholic nuns and farmers. After spending some time in Château-Renault (Indre-et-Loire) with a nurse who mistreated her when she discovered that Rachel was Jewish, Rachel was sent to another family of farmers, Mr. and Mrs. Saillard, who treated her nicely.

After liberation, Rachel and Louise returned to Paris to live with their grandmother. Their grandfather had passed away in 1943. The two sisters kept going to the Hôtel Lutetia where the survivors came back, but they quickly realized that they would not see their parents again.

Louise got married in 1948 and left for Palestine with her husband and newborn baby. Rachel stayed in Belgium for a while with a cousin of her father, but she wanted to join Louise in Palestine. She travelled to Marseilles and took a boat to Israel in July 1949. Louise eventually decided to return to France since she did not have any family in Israel, and Rachel came back with her.

At 16 and a half, Rachel was living by herself in a small apartment in Paris and was working as a seamstress. One of her biggest regrets is that she never had a chance to go to high school. She married a son of a deportee in 1955 and had a daughter. She now has two grandsons of whom she is very proud.

Rachel has been very active in the Association de la Mémoire Juive in Paris and keeps telling her story in many schools. She is also a member of the commission that puts plaques in Paris to locate memorial sites related to the Holocaust. Rachel’s testimony was published in a book in France that has been translated into English, The Hidden Children of France, 1940-1945: Stories of Survival (New York: Excelsior Edition, 2010).