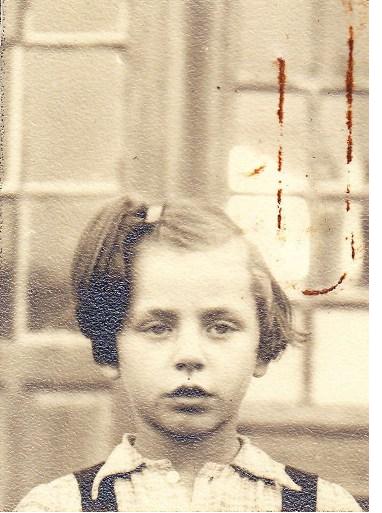 Regina Findling was the youngest of five children born to Ella and David Wolf Findling in Cologne, Germany. In 1939, Regina’s father was deported from Germany to Poland, where he was killed. In 1943, Regina’s mother, Ella, was deported from Malines, a transit camp in Belgium, to Auschwitz, where she was murdered.

When she was about 18 months old, Regina’s parents sent her to Belgium and Amsterdam. She believes this photo was taken of her when she was hiding in a Catholic convent at the age of six. In addition to the convent, she lived in children’s homes in Lasne, Belgium, and Les Hirondelles, Belgium, and in private homes with gentiles who risked their lives to shelter her. She vividly remembers her time in Lasne and would like to reconnect with other children who were there—especially her best friend, Mariette.

Regina’s brothers and sisters were also in hiding during the war, and all of them survived. At age 11, in February 1948, Regina immigrated to the United States aboard the S.S. Marine Jumper. She lived in foster homes in Detroit, Michigan, until the age of 18. The Jewish Social Service Bureau, now the Jewish Family and Children’s Service, was responsible for her foster home placements.

After graduating from Cass Technical High School, Regina became a ward clerk in the Henry Ford Hospital in Detroit. Regina Findling Clark currently lives in Oregon with her husband.

Regina had not seen a copy of this photo of herself before she saw it on the “Remember Me?” Website. She said, “Hundreds of people looked after me and I feel like I can’t complain, but the memories are still so painful. It is I who am honored by [the Museum’s] interest and concern.  And I'm deeply touched by this experience and by your caring.”