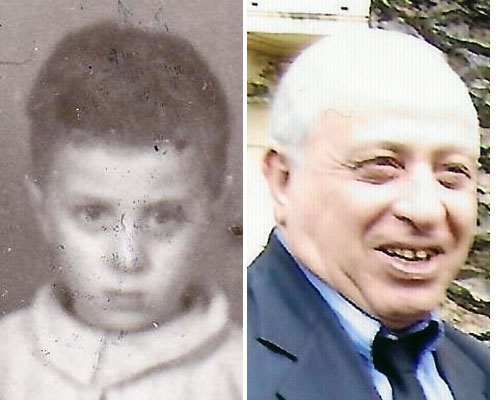 Renato Sermoneta remembers well when this picture was taken. He has a vivid memory of going to a photography studio in Trastevere with his twin brother, Salvatore; his older brother, Vittorio; and his cousins. The war was over and the kids were back at school. Still, nothing was as before the war: His father had been killed by the SS in the infamous Ardeatine Caves massacre, one of 335 people murdered in a reprisal action for a bomb placed by the Italian resistance against the Nazi occupation.

Renato, who is pictured on this page, and his twin brother, Salvatore, were born in Rome on September 20, 1941. Rome had the largest Jewish community of any city in Italy. In 1938 Benito Mussolini had issued racial legislation that emulated the Nuremberg Laws. When Renato and Salvatore were born, their family was already hiding in a house in the old ghetto. In September 1943, when Italy surrendered to the Allies and Germany invaded, the situation became critical for Italian Jews. The Nazis began rounding up and deporting Jews to concentration camps.

Renato's father, Benedetto, understood that the old ghetto was not safe anymore. The Sermonetas moved to La Magliana, a neighborhood far from the city center, where a Catholic family gave them refuge. Benedetto had to provide for his family, though, so every day he left their safe dwelling and went to the city center to search for job opportunities.

On March 23, 1944, an Italian resistance group detonated a bomb when a police column was passing in via Rasella. By the following morning, 33 German policemen were dead.

The Wehrmacht commandant in Rome and the SS lieutenant, Herbert Kappler, agreed on a reprisal action in which ten Italian civilians would be shot for each policeman killed in the guerilla action. They suggested selecting those to be shot from individuals already condemned to death. However, only seven prisoners were awaiting execution in Roman jails, and to reach the required quota the Nazis summoned prisoners awaiting their trials and 75 Jews from the Regina Coeli prison. Finally, they rounded up civilians found on the streets of Rome. Someone told them that Benedetto was Jewish. The reward for the denunciation was five thousand liras, or just a few dollars.

The SS acted very quickly, and nothing was told to the population until the reprisal was concluded. On March 24, Benedetto had breakfast with his family, then left to look for a job as usual. He never came back. Around noon, the Germans issued an announcement about the act of resistance and the reprisal of ten Italians for one German.

Renato's mother, Eugenia, was left alone with four sons: Alberto (9 years old), Vittorio (6 years old), and the twins (3 years old). Between the fear of being deported and the economic penuries, Eugenia had to raise the kids in a hostile environment. Renato remembers that his mother went to ask for milk from a person who was helping needy families. She was carrying the twins, one in each arm. She was told, "We have nothing for the Jews."

Alberto started working to support the family. After the war ended, the younger Sermoneta brothers returned to school. They studied at Jewish schools in Rome and then enrolled at the ORT school, where they studied radio technology. They later found good jobs in the aviation sector working with radar. After the compulsory 18 months of military service, however, they had a hard time finding work. Both of them ended up working in trade, as their father had done.

During their childhood, the help of sponsors in the States and in Canada was important to assist the family. Renato remembers the name of his sponsor, James Rosenthal. He never met him but once a couple of James's relatives went to Rome to meet him. They took Renato to a department store and he thinks they purchased him any gift he wanted. He still remembers going back home with what looked  to him like a lot of toys and gifts. Later in life, they offered him the opportunity to move to Canada in order to complete his studies and find a job. But neither he nor Salvatore wanted to leave their mother; she had made so many sacrifices for them, and it was time to reward her.

They always lived in Rome, where Salvatore died in 2007. Renato is retired and living in Rome. He has an extensive knowledge of the city and the history of its Jewish community. Renato has two sons and a granddaughter, Benedetta.