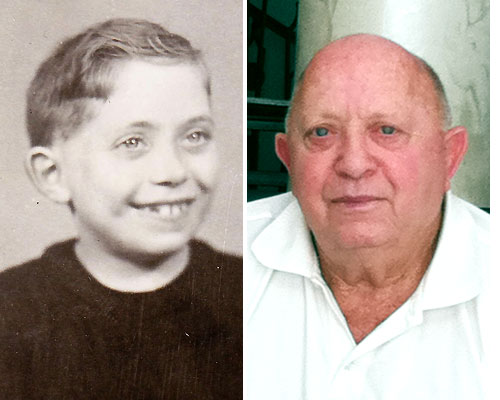 René saw a description of the Remember Me? project in the quarterly newsletter of Aloumim, an organization in Israel of children who were hidden in France during World War II

He was very curious so he went to the Museum’s Web site and found first the photograph of his brother, Lucien, and then his own. He told his brother about the project. René does not remember when his picture was taken nor had he seen it before. He thinks that he was about ten years old and that it might have been taken at the Oeuvre de Protection des Enfants Juifs (OPEJ) orphanage in Malmaison near Paris, where he and his brother stayed for a period after the war.

René was born in Paris on August 3, 1936, to Tauba, née Bursteyn, and Mayer Berkowicz.

The family was arrested on July 31, 1942. René’s parents were deported to Drancy and from there to Auschwitz. The boys were taken off the Gestapo truck and placed first at an institution on rue Lamarck and later at Guy Patin. Both places were run by the Union générale des israélites de France (UGIF). In the year 2000 Mrs. Miri Lustig contacted René and Lucien. She volunteered at the institutions where they were during the war and afterwards. She gave them some documents and photographs from the time when she volunteered during the war. She herself had managed to hide when the institutions were closed and thus survived the war.

René remembers clearly his father’s last instructions to him not to forget that his name was René Berkowicz. The boys remained in Paris for about six months and then, when René was six and a half years old, in mid January 1943, Lucien noticed strange things taking place in the institution. The brothers left with a group of children and eventually were taken to the village of Savigny-le-Vieux near Sainte-Hildaire-de-Halcouet in Normandy, where they were distributed among families. The first family with whom René stayed was the Lemonniers.  They were not very warm or friendly to him and so he was moved to the home of an elderly, single woman by the name of Ms. Prim. Another boy, Simon Jeruchim, lived there as well. He was seven years older than René. Simon left on a bicycle for Paris at the end of June 1944 when the village was liberated by American soldiers. The two recently met in Paris after not seeing each other for 63 years. Simon has written a book about his experiences during the war: Hidden in France: A Boy’s Journey under the Nazi Occupation (Santa Barbara, California: 2006).

After the war, as French orphans, René and Lucien spent a month in a special sanatorium and then their aunt, the wife of their mother’s brother, kept them for several months at their home. Due to a lack of financial means, they were placed at an OPEJ orphanage in February 1946. An aunt in Israel, a young sister of their mother, who had managed miraculously to escape from a concentration camp to Palestine during the war, wanted them to be prepared to move to Israel. That education was given them in the OPEJ orphanages.

The brothers came to Israel in December 1948 and René was placed in Kibbutz Afikim. In 1954 he was conscripted into Zahal, the Israeli army, and when he completed his service, he returned to the kibbutz in February 1957 and stayed there until 1963.

Later, René lived in several places in Israel and spent two years in Los Angeles and two years in South Africa where he worked as a technician. He has been married for 19 years and has been living in Bat Yam.

In 1982 René returned for the first time to the village where he had been hidden.  No one he knew was there any more and the old woman who hid him was no longer alive.

René went with his wife to France for a ceremony that took place in Normandy on May 28, 2011, and that also served as a reunion of children who were hidden there during the war. At the ceremony, a plaque was installed honoring the village where about 30 children, with six sets of siblings among them, were hidden. He said that it was a very emotional day for him especially since a teacher of his who is 90 years old greeted him with stories about him as a child that he did not remember.

It was an important event especially because René and his brother, Lucien, had tried to get the villagers recognized as Righteous Among the Nations by Yad Vashem in the 1980s, but they were disappointed when told that only individuals, not groups, were given the honor.