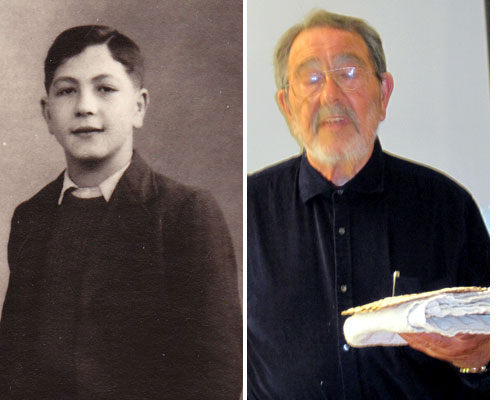 Samuel Ramstein learned about his picture on the Internet from a friend of his sister. He thinks that his mother sent the photograph, taken right after the war, to his godfather, Samuel R. Parnes, who lived in New York and sent money to Samuel’s mother every month. Samuel remembers meeting him once and was impressed because it was at the luxurious Hotel de Crillon in Paris. After seeing his photo on the Remember Me? page, Samuel said that, although he had seen the picture before, he was still surprised. He decided to look for more information about his godfather’s fate in New York.

Samuel’s father was born in 1901 to Romanian parents in France. He worked as a bus controller and then was a craftsman working with rubber at home. Samuel’s mother was born in 1902 in Siedlice, Poland, and arrived in Paris in 1929. She married Samuel’s father in 1931 and became a French citizen. She worked as a seamstress. Samuel was born in February 17, 1933, in the 4tharrondissement of Paris. He has one sister, Jacqueline. The whole family lived in the 3rdarrondissement in Paris before moving into a small apartment in the 4th arrondissement on the rue du Prévôt.

Samuel’s father was drafted during World War II and demobilized at the end of 1940. His father never thought he would be arrested since he was a French citizen and felt secure in France. For that reason, he did register during the census of the Jews. He was arrested during the first round-up in Paris in August 22, 1941. Samuel saw the arrest and told his mother right away. Samuel’s mother prepared a package to bring to her husband at the police station where he was held prisoner. Samuel’s father was then deported from Drancy to Auschwitz on June 22, 1942 (Convoy 3), and died there on July 18, 1942.

As the situation in Paris became more and more dangerous, Samuel’s mother decided in February 1943 to take her children to a children’s home run by the Union Générale des Israélites de France (U.G.I.F.) on the rue Lamarck (18tharrondissement of Paris). But in the afternoon of that same day, she changed her mind and wanted them back home. She went back to rue Lamarck, but the staff there did not want to give her back her children. The next day, she returned early in the morning and was able to take Jacqueline and Samuel back home. That same day, all the children and staff of this U.G.I.F. home were arrested by the French police.

Samuel’s mother took her children to a grocery on the rue des Rosiers that was owned by a Polish woman, Madame Lea. Samuel and his sister were told that they must have new names and that they were no longer Jewish. Samuel would become Marcel Rameau, Jacqueline would be Jacqueline Rameau. From June 1943 to June 1944, the two children were at La Chapelle-du-Bois-des-Faulx, near Evreux in Normandy with a nanny, who also took care of five other Jewish children.

In June 1944, after D-Day, Samuel remembers that he saw the American troops. He also remembers that the seven children liked playing what many years later appears to be a cruel game, telling each other that their mother was there to pick them up when it was not true. One day, Samuel was the target of this game. He told his sister that he would not be a fool and they both hid. But the other children kept calling both of them and this lasted too long to be just a game. Samuel and Jacqueline decided eventually to come out. They then saw that their mother was standing there, accompanied by a French officer. Samuel was proud to be the first child whose mother came to take him back home. Samuel never really knew what happened to his mother during the time that they were apart. He only knows that she remained hidden in an attic by someone. She never went back to her apartment.

Later, Samuel learned that after the liberation of Paris in August 1944, his mother went back to see Madame Lea to learn where her children were hidden. Although Madame Lea at first did not seem very cooperative, she eventually gave Samuel’s mother the address. Samuel thinks that the place where he and his sister were hidden received money from the association L’entraide temporaire, which was an ecumenical (Protestant, Catholic, and Jewish) association that helped Jewish children.

Back in Paris with their mother, Samuel returned to school. Without telling anyone, his teacher decided to register him to take the entrance exam for middle school (6ème au Lycée). This gave a chance to Samuel to study and eventually become a pediatrician. Later, he met the famed doctor Francoise Dolto, who changed his way of practicing psychoanalysis with children. He wrote a book entitled Un pédiatre raconte.   Samuel’s mother had not had the chance to go to school, but she decided that if her son pursued his studies, there was no reason why her daughter could not do the same. Therefore, Samuel’s sister continued her education and became an ophthalmologist.

Samuel has two sons and five grandchildren. He helped to found the Association des Enfants Cachés (Association of Hidden Children) and served as its chairman.  He recently visited the United States Holocaust Memorial Museum and was impressed by the long line of people waiting outside. He was about to give up when a Museum employee, Theodore Shealy, saw him and asked him if he was a Holocaust survivor. Samuel answered he was, so Theodore took him to the Museum. Samuel was impressed by the Museum’s presentation of this history and said that the Museum’s ID cards were an effective way to understand individual stories and Holocaust history.