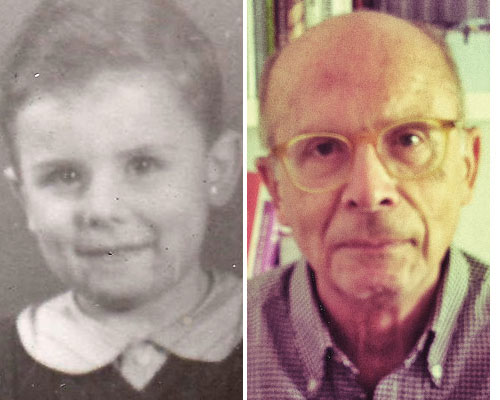 A friend of his daughter told Sandro Menasci that there was a picture of him as a child on the Remember Me? website. At first he couldn’t believe it. Then he remembered that his family was forced to move many times during World War II, from one religious institution to another; he believes the photo was taken on one of those occasions. Sandro couldn’t find his sister among the photos, even though they were together all the time. However, he recognized a picture of his cousin Marina Del Monte and remembered that many of his cousins were also hidden inside churches or religious institutions during the Holocaust.

Sandro was born in Rome in 1941 and was just two years old when he, his mother, and his sister escaped the massive roundup of Jews that took place October 15-18, 1943. They survived thanks to a neighbor who ran to warn them that the Germans were on their way. The family was able to hide for some time in the apartment of another neighbor before moving to a religious institution.

Sandro’s father, Umberto, was captured by the Germans, who had been tipped off about his whereabouts. He was killed in the 1944 Ardeatine Caves Massacre along with five of Sandro’s relatives: two uncles and three cousins.

Sandro remembers that conditions were quite good inside the institutions he lived in during the war, despite constant food shortages. Life became worse after his father was killed. One of his worst memories of that period is entering the Ardeatine Caves and seeing the bodies of those who had been killed, among whom were his father and other family members. Sandro also remembers the day he and his family were finally able to go back to their own homes and found that they had been completely emptied of all their belongings.

After the war Sandro’s mother opened a boutique. She died at the age of 53, when Sandro was just 16. A year later, Sandro was hired by one of the oldest and largest firms in Rome that produced eyeglasses, where he worked until he retired in 2005. In 1967, Sandro married Luzon Perla Wally, a Jewish woman from Libya whose family had escaped their home country and settled in Italy. Sandro and Luzon have two children and four grandchildren.