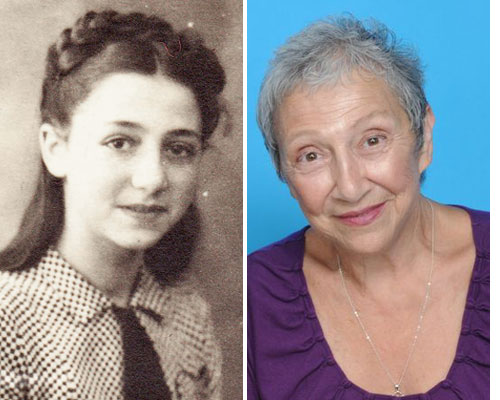 Sarah Modern Irom was flooded with memories of her past after seeing her photograph. “Life was not an easy one during that time,” she said. She had completely forgotten about this photo and upon viewing it remembered that it was taken before the war in a Paris studio by a professional photographer. She believes she was about eight and a half years old when the photograph was taken.

Sarah was born in Paris on November 25, 1933. Her mother, Rojza, and father, Rudolph, immigrated to France from Poland and Austria respectively. Sarah’s sister, Madeleine, was born in Paris seven years after Sarah. The family remained in Paris during the early years of the war. Sarah remembers hearing the sirens and waking up in the basement of her apartment building in her father’s arms with about 100 people around them. After several instances of evading the French police and Germans, Sarah was sent into hiding in early 1943. Her father arranged for her to live on a farm in Normandy. Sarah remembers being able to attend school and helping out with chores on the farm.

Sarah’s father was arrested in January 1944 and deported from Drancy to Auschwitz on February 3, 1944. He did not return and is believed to have been murdered in Auschwitz. The same day of his arrest, Sarah’s mother, sister, and newborn brother, Marcel, took refuge at a neighbor’s apartment. The next day Sarah’s mother contacted the Comité rue Amelot. They helped with train tickets for the family to join Sarah on the farm in Normandy. Sarah was quite surprised to find out she had a baby brother, who was born in November 1943, after she had left Paris. The family was able to stay together on the farm until liberation.

Due to their location in Normandy, Sarah had a firsthand experience of liberation in France. She remembers the Germans leaving and singing during the middle of the night. She remembers that there were a lot of planes flying overhead a few days after that. Then she remembers the Americans rolling through her small town throwing candy and cigarettes from their trucks.

After liberation, the family went back to Paris and found the same apartment they had before they went into hiding. The apartment was too small for the family, so Sarah’s brother and sister were sent to live at Maison Laffitte, a children’s home outside Paris. Sarah’s siblings grew up in the home. She and her mother visited them every week until her mother found an apartment large enough for all of them to stay.

Sarah attended and graduated from business school in France and started working for a company that made movies. In 1961 the family visited Sarah’s uncle in Israel. Sarah decided to stay in Israel and met and married her husband, Rafael Irom, there. They married in 1964 and moved between Israel and Paris before immigrating to the United States in 1969. They moved around the country before settling in Tulsa, Oklahoma, in 1975. There they ran real estate and laundromat businesses. Sarah is now retired in Tulsa.  She has two children, Yael and Rouven, who were born in Israel, and two grandchildren, Hannah and Jacob.

Sarah reflected that the Remember Me? project is a good thing and that while it may not bring closure, it will help to remember and record what happened.