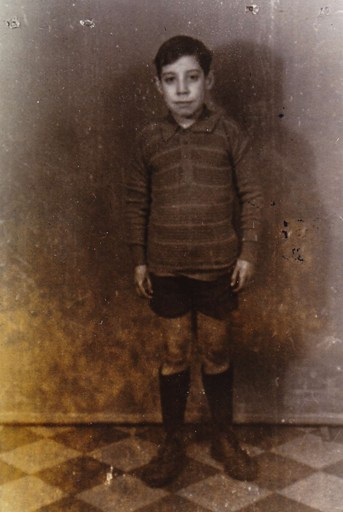 Sergio Di Castro was born in Rome in 1935. When he was eight years old, he saw a squad of Italian fascists push his father onto a truck in the middle of the market on Piazza Vittorio. He never saw his father again.  Even today, he cannot retell the story without feeling the pain and the loss that terrible moment meant to his entire life. His nephew, Fabio Di Nepi, found Sergio's picture on the Remember Me? site and helped us contact him and record his story.

Born to Giuseppe and Italia, Sergio was the youngest of three siblings; his sisters, Angela and Silvia, were 16 and 14 years old, respectively, when the Germans occupied Rome. Too poor to be able to leave Rome, the family had no choice but to stay after the first roundup in the ghetto on October 16, 1943. They lived outside the ghetto, on the other side of the Tiber River, and hoped that nobody would denounce them as Jewish. Giuseppe had difficulty living unnoticed, however, as he was the rabbi at the Spanish synagogue in Rome. He did not receive any salary for this position, so he and Italia sold small sewing implements at Piazza Vittorio, then the largest market in Rome. Unable to obtain a license for a stall because of racial laws enacted by the Fascist regime, they set up an improvised display box for their merchandise.

On March 29, 1944, Giuseppe was asked to officiate at a funeral. The gathering of a group of Jews seemed audacious, but conducting funeral services was part of Giuseppe's role in his community. Italia and little Sergio went to the market alone, set their small box of merchandise on the curb, and waited for Giuseppe.  As soon as he arrived, a truck full of Fascist militiamen stopped, seized him, and forced him into their vehicle. This is Sergio's last memory of his father.

Someone had probably denounced Giuseppe to the Fascists. Italia and her children did not return to the market or to the house; they spent the rest of the war hiding with relatives. After the war, when Giuseppe did not come back from the concentration camps as a few others did, the family understood that he was dead. Fabio, Angela's son, remembers that he grew up hearing that his grandfather had been “taken away by the Germans,” a euphemism that acknowledged the loss without mentioning the terrible truth.

The Italian Fascists had delivered Giuseppe to the Germans after his arrest. He spent a few days in a prison in Rome before being moved to the transfer camp Fossoli. From there, he boarded a train to Auschwitz, where he was killed.

Italia and the children remained together during the years that followed. After the war, Italia returned to the Piazza Vittorio market, where she was able to obtain a license to sell her merchandise at a stall. Sergio and his sisters found jobs as assistants in clothing shops in Rome. Unfortunately, Angela died in 1955, when her son Fabio was just a baby; Silvia took over care of him as though she were his mother.

Sergio married his wife, Rina, in 1962. They still live in Rome, as do their three daughters and one grandchild.