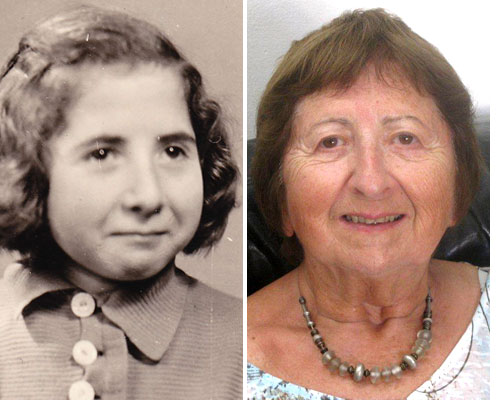 Suzanne Keller read about the Remember Me? project in the newsletter of Aloumim, the organization of French Jewish children who were hidden during the war. Because she had lost all hope of finding information about her family’s experiences during the war, she stopped pursuing leads for fear of disappointment. She knows very little about her father’s family and nothing about her mother’s. She checked the Museum’s Web site only after she heard about the Remember Me? project from Bracha Aris, whom she knew at the Malmaison orphanage in France. They were in touch for a period after the war but eventually lost contact. She was completely surprised and very happy to see her photograph. Her hope is that perhaps through this project she will be able to learn some information about her family.

Suzanne was born on February 25, 1937, in Belfort, France, near Basel and the border with Switzerland. In the late ’20s, her parents, Antonina Albauer and Hanoch Moshe Keller, moved to Magdeburg, Germany, from their home in what was then Poland. Suzanne’s brother Wolfgang was born there in 1931. In 1933, when Hitler rose to power, they moved to France to be near her father’s brother, Naftali, who had a wife and three children and lived in Belfort.

Suzanne has no memories of her life before and during the war. She was mute during that period and thinks that she may have witnessed a traumatic event that caused her to disconnect and therefore remember nothing. Many years ago, Suzanne found out from Serge Klarsfeld’s project to document the fate of French Jews that that all her family was deported to Auschwitz. Her mother was on Convoy 6, which was sent to Auschwitz on July 17, 1942. Her father and brother were on Convoy 40, which left France on November 3, 1942, and her uncle and his family were also sent to Auschwitz. They all perished there.

After the war, Suzanne was at the Malmaison orphanage near Paris, and that is where her memory begins. She had two aunts living in Palestine, sisters of her father, who left Poland in 1926 and in 1930 respectively. They were the only survivors from her father’s large family. One of the aunts saw Suzanne’s name in a newsletter listing survivors that was published after the war (La-Karov Ve-larahok), and she began looking for her. Eventually she was able to make arrangements through a lawyer to bring Suzanne to Jerusalem. Suzanne arrived in Jerusalem on August 14, 1947, when she was about nine years old. Her aunt, Tonka Swimmer, cared for her like a mother. She had no children of her own and died in 1980. The other aunt had two daughters, and Suzanne is close to her cousins and their families.

Suzanne has lived in Jerusalem ever since, attending school from the fourth grade on and belonging to a youth movement.

Suzanne and her husband, Emmanuel Silberman, live in the Yemin Moshe neighborhood near the King David Hotel.They have three children and five grandchildren. Emmanuel is a customs agent and she has worked with him in his office.

Suzanne has attended the annual commemorations of the Holocaust at the memorial to French Jewry in the mountains of Jerusalem, but until the last few years, she seldom spoke to anyone about the war.

Suzanne has only one picture of herself with her parents and brother when she was two years old and a few pre-war pictures of her father’s large family in Poland.

Suzanne is very grateful to the Museum for launching the Remember Me? project and hopes to gain some information on her past and her family roots.