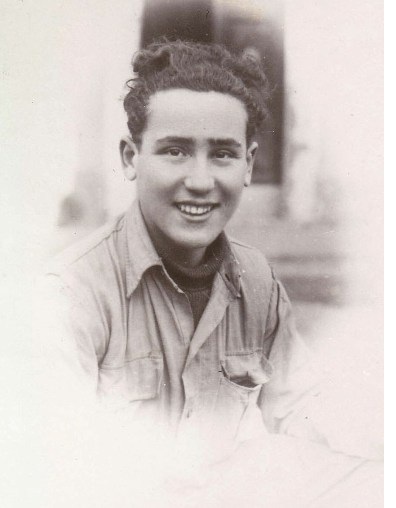 According to Umberto Cardoso, this picture was taken when he was 16. He does not remember the exact circumstances in which it was taken, but he believes he was in Florence, Italy, at the time. His grandson noticed the picture on the Remember Me? website and told him about it. Umberto doesn’t know how to use the Internet, so he asked his granddaughter to contact the Museum.

Umberto was born in Florence on June 24, 1929. During the war, he lived in Florence. He never met his father, Umberto Innocenzi, but he knows he immigrated to the United States around between 1936 and 1938. They never looked for each other, but he knows he died in 1968. Umberto has no good memories about the war period: all he can remember is the cold and being hungry all the time. In 1944, Umberto was captured by a Fascist squad that included a neighbor of his who knew he was Jewish. The squad took him to the artillery barracks and put him in a room but forgot to lock the door. He was then able to get out, go to the area where the horses were kept, hop on one of the horses, and then jump over the barracks wall. Afterward, he went from one village to another. He stopped in Castiglione Fiorentino, where an acquaintance, a postal courier, gave him room and board in exchange for help with his job. Umberto stayed there about four months then went back to Florence where he lived with his aunt Rina for a year. Rina, a Gentile, hid him in her apartment. He did not go outside for an entire year. After the war, a group that helped refugees go to Palestine contacted Umberto. He remembers the person who contacted him was a Miss Ada Sereni. He was 17 years old.

The British detained Umberto as an illegal immigrant when he reached Haifa and then sent him to a camp in Cyprus, where he stayed for four years before he could finally move to Israel. In Israel, he lived on a kibbutz for six years. He met his wife, Flaminia Anticoli, who is from Rome, during that journey from Italy to Israel, and they married when he was 18. They have two children, eight grandchildren, and four great-grandchildren. Flaminia’s father was killed in a concentration camp while Umberto lost his aunt and uncle and a cousin, all taken to Germany and killed there. His mother joined him in Israel and lived with them until she died at age 98. After leaving the kibbutz, Umberto worked for the Municipal Drinking Water Company in Aseret, a small village of 3,000 to 4,000 inhabitants, for 30 years. He has since retired but still lives in Aseret.