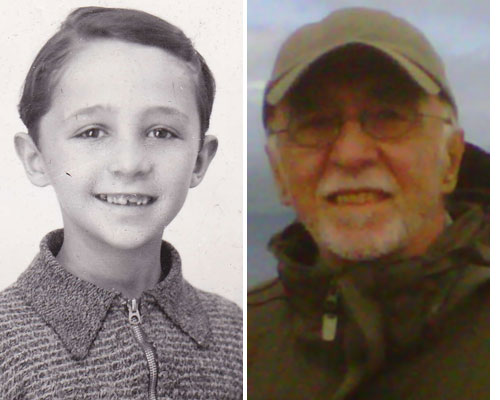 Not long ago, Victor Herzog Googled his name and was surprised to find it on the Museum’s Remember Me? website. He contacted the Museum but was reluctant to tell us his story. Given his family’s wartime experiences, his mother always instructed him to divulge as little information as possible. He and his sister still have this habit today.

After Museum researchers were able to find a great deal of information on the sad fate of Victor’s family during the Holocaust—especially about his paternal grandparents, Ida and Emerich Herzog, and his aunt, Hedwig Katharina Ritter, who lived in Vienna before the war—he became convinced of the importance of the Museum’s work. Victor’s grandfather was a well-known and respected mining engineer and his aunt was a state opera singer. We also conducted research on Victor’s maternal family, the Fidlers.

Victor’s father, Herbert William, born in 1900 in Vienna,was a journalist and owned newspapers before the war as well as afterward. He traveled around the world to exotic places and wrote travel guides. He was married in the United States and lived in New York for a time, but divorced his wife, gave up his United States citizenship, and returned to Europe. He married Victor’s mother, Brocha (née Fidler) who was born in Lomza in 1907. They first married in Danzig (Gdańsk), and then they remarried in 1936 in London. The children were born during their parents’ travels: Victor’s sister, Anna, in Monaco in 1937 and Victor in 1938 in Antwerp.

Victor spent time in a Catholic hospital for orphans during the war because he suffered from rickets. He does not know the name of the institution nor how long he spent there. His sister, who is only 18 months older than Victor, also does not know this information. They think he may have been there for a year and a half. He was evacuated as the Germans moved to southern France.

Victor’s father managed to escape and during the war lived in Spain. Victor saw him there in the early 1960s and also met his half-brothers, Michael Herzog and Richard Herzog, with whom he would very much like to connect.

After the war, Victor and his mother were reunited thanks to the help of the Red Cross. First the children were with their mother in Paris, but later the family moved to Nice, where they remained until an American GI sponsored their immigration to the United States. They have lived in the Los Angeles area ever since and have kept in touch with their sponsor and his family over the years.

To make ends meet, Victor’s mother worked as a seamstress in Nice and then in the United States. They received assistance from the local Jewish Family Services organization. Victor worked in several French restaurants and eventually opened his own place.

Victor was married twice and has three children.

His experiences and those of his family make him very sensitive to the subject of the Holocaust, and he is reluctant to even think of visiting Poland and Auschwitz for fear of the emotional impact it would have on him.