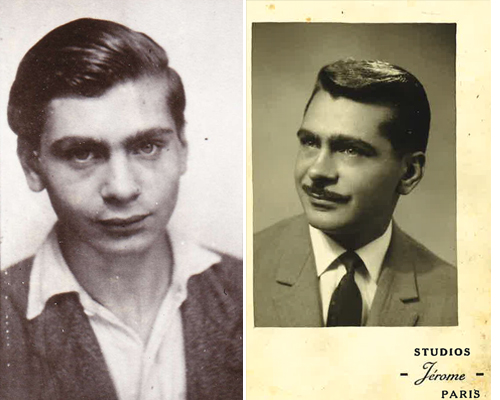 Raphaël Obadia had never seen this photograph of his late father, Vitalis, and was very surprised when he saw it online. Raphaël recognized his father because he has another photo of him that was taken one or two years earlier than the one on our website. Vitalis passed away in 2005 and never talked much about his experiences during the Holocaust. Raphaël shared with us what he could about his father’s life during that period.

Vitalis’s father, also named Raphaël  Obadia, was born in Adrianople (now Edirne) in 1902. He and his wife, Susanne (née Treves), were Turkish immigrants living in Paris, France. While there, they had seven children, and Vitalis, born in 1930, was the fifth. Raphaël worked as a furrier, and Susanne cared for their children at their home in the 11th arrondissement.

In June 1941, well before the deportations of 1942, French police arrested Raphaël. He was imprisoned for ten months in France before being deported to Auschwitz in June 1942. Raphaël died at Auschwitz on October 22, 1942.

The rest of the family avoided deportation and survived the Holocaust. Susanne remained in Paris for the duration of the war, while an organization hid her children in different places in Paris and its outskirts.Some of the children were hidden in pairs, while others, including Vitalis, were hidden alone. Vitalis was first sent to a farm about 80 to 100 kilometers from Paris. While he was hidden there, he attended a local school. One day, German soldiers came to that school and arrested some of the pupils, including Vitalis. The soldiers were going to murder the children, but an attack by the French Resistance saved the children. Vitalis was later moved to a new location close to Paris, called La Varenne, where he stayed with a Mrs. Vanon.

In 1943, all of the Obadia children except for the two eldest came back to Paris and remained at the home where they were living when their father was arrested.One night, the family narrowly escaped arrest. The French police came to their building and went from the ground floor to the third floor arresting Jewish people living there. The Obadia family lived on the fifth floor and was not arrested. They were not the only Jewish family to stay in the 11th arrondissement during the war. Many Jewish people had lived there before the war, and many stayed. According to Raphaël, Vitalis and his family suspected that someone from the police had provided information to Jewish residents of the neighborhood to help them avoid being arrested.At the age of 13, Vitalis became bar mitzvah during the German occupation at a synagogue near his home on rue Popincourt. Raphaël has a picture from his father’s bar mitzvah; it is the only photograph he has from his father’s childhood.

After the war, the Obadia family lived what Raphaël calls “a normal life.” Vitalis became a furrier like his father. For 40 years, he worked about 500 meters from the place where he had lived with his family during the war. He married a woman named Rivka Abramoff. Rivka’s family had fled the Soviet Union in 1933 and arrived in Paris in 1939, following a long journey. After her brother was born in 1939, Rivka’s father decided that the family should leave France. They made their way to Palestine, and after World War II, Rivka returned to Paris, where she met Vitalis.

In addition to their son Raphaël, Vitalis and Rivka also had a daughter, Nadine. One of Vitalis’s sisters was very active with commemoration activities. She and her husband, a survivor of the Warsaw ghetto, both gave testimonies to the Spielberg Foundation.