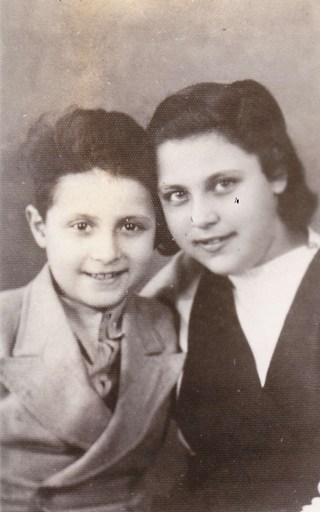 Wlodek Sztykgold learned about Remember Me? from friends who saw an article about it in the Israeli women’s magazine La-Ishah.

Wlodek was born on September 20, 1936, to a well-to-do family in the heart of Warsaw. They lived in an apartment building that stood between the largest church and the main courthouse. His paternal family had lived in Warsaw for generations.

Wlodek’s parents were Mistislav Moshe Josef and Helena (née Klajnernan) Sztykgold. Their daughter, Wanda, was four years older than Wlodek. Wlodek’s father was an industrialist who had graduated from a technical school in Warsaw. He had a factory that made gas street lamps and another that made hospital equipment. As a young man he was also a builder.

Wlodek lost 300 relatives in the Holocaust. His father had three sisters and two brothers, and his mother had three brothers and a sister. Of all the siblings, only two sisters survived.

After Germany invaded Poland, Wlodek and his parents were able to remain in their home until March 1943 because their apartment was in a a part of Warsaw that was incorporated into the ghetto.  His sister escaped to the Aryan side a year earlier, and his father worked in a forced labor detail. In March 1943, Wlodek, his mother, and his nanny, a Ukrainian woman named Michaela Omelanchuk, were very fortunate to cross safely  to the Aryan side, thereby avoiding deportation. His mother saw how weak he was after days without food or water and decided that it was worth taking a chance. He had false documents indicating that he was the son of his nanny, who was like a second mother to him. The document stated that his father was unknown. He still has those documents as well as his mother’s false birth certificate in Russian. Wlodek’s father remained in the ghetto with his grandfather even when there was almost no one left. Just before the uprising they were taken out to Pontiatow. According to Wlodek,  they were promised that they would not be sent East but  would continue working in the factory there. In the end the workers there all perished.

On the Aryan side, they were nearly denounced to the Germans several times, but thanks to payments of much money, they survived. Afraid that it would happen again, his mother took Wlodek to ?yrardów, where he stayed with a Christian family whom she paid much money to save her son. The family also supported itself by making alcohol illegally. Wlodek remained there until liberation. He had many lucky moments when he could have been caught.

Wlodek’s mother was liberated half a year earlier than he was because she was on the other side of the Wis?a River. She came to look for him at the home where he was hidden. He was totally surprised to see her after a whole year with no contact because he was certain that he was the last Jew alive.

Wlodek’s mother worked in the Jewish children’s home in Otwock right after the war and brought him there to be with her. The home, which had about 120 children, was organized with the support of the Joint Distribution Committee. The children stayed there until 1949. They lacked clothing and good food in the very beginning, but soon individuals from the United States and other organizations sent them everything they needed and more.

The children attended a public school in the town and became very close with one another. Many of them have remained in contact throughout the years. Wlodek remembers that there were no roads from the town then and only pathways where one had to watch for signs about dangerous explosives. There was no bridge across the Wis?a, only boat-made pontoons.

After working in the children’s home for some time, Wlodek’s mother returned to Warsaw where she remarried. Wlodek stayed in the children’s home until it closed in 1949. The children were transferred to an orphanage in Krakow, but he joined his mother and stepfather in Warsaw. There he completed high school and attended a technical school for two years.

In 1957 Wlodek left for Israel, where he joined his sister who had moved there ten years earlier. She lived  in Kiryat Shemonah, but he stayed with her for only a short time before going to Tel Aviv, where he tried to learn Hebrew at an ulpan. There were other people from Poland at the Hebrew immersion school, so Wlodek felt that he would not learn Hebrew there. He was studying to become an engraver when he was conscripted into the army for two and half years. After his army service he studied at Hebrew University in Jerusalem and became an interior decorator. He had his own business for many years before retiring.

Yoram, as Wlodek is known in Israel, married Liora, also a survivor from Poland. She was born in Tarnopol and spent time in the children’s home in Krakow after the war. The children from that home also have kept in touch regularly. Liora and Yoram have two children and six grandchildren. They have visited the United States three times and have spent time at  the United States Holocaust Memorial Museum. Wlodek has given a full testimony to Yad Vashem detailing his life during the war.

Yoram’s mother lived in Warsaw until ten years ago when she came to Israel; she died soon afterwards.