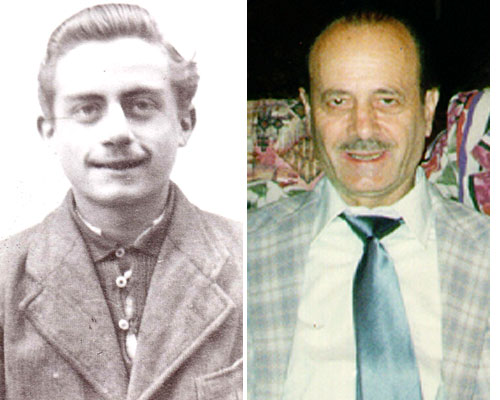 The child in this photo is believed to be Yaksil Chaim Lewit. His daughter, Daisy Ann Lewit, received an e-mail about the Remember Me? project because she is a member of the United States Holocaust Memorial Museum. She decided to take a closer look at the photographs and was surprised to recognize her father as one of the nameless child survivors. Daisy Ann recounted that seeing the photograph “was like a punch in the stomach.” She had never seen a photograph of her father that young, let alone a photograph of him with such a genuine smile.

Unfortunately, Yaksil Chaim Lewit passed away at the age of 72 on December 14, 1995. He hardly ever spoke to his family about his life during the war. Daisy Ann reported that he had a very hard life and wrestled with the memories of his Holocaust experiences. His family never pushed him to talk because it was too painful and very little is known about his family’s early persecution. The following was pieced together from the stories Yaksil told his daughter, Claims Conference compensation forms, and archival materials discovered at the United States Holocaust Memorial Museum.

Yaksil was born to Hercka Naftali and Tauba (née Strzegowska) Lewit in Slomniki, Poland, on June 17, 1923. He had an older brother, Isaac; a younger brother, Jechial; and a sister, Malka. His family owned a general store in Slomniki before the war. Little is known about the situation and location of the family as the war progressed in Poland. Yaksil told his daughter that the Nazis conducted a selection process, presumably in Slomniki, and after that point he never saw his parents or younger siblings again. Because Yaksil was street-smart and had a great will to survive, he told the Nazis that he and his brother knew construction. He felt that would save them from being killed or being sent directly to a death camp. Yaksil and his older brother, Isaac, were selected for work and survived the war. They were subjected to very harsh conditions and toiled and starved through the years of the Holocaust.

According to postwar testimonial documentation, Yaksil and Isaac were used for forced labor in Slomniki, Krakow, and Plaszow, Poland, until 1943. They were used mainly for hard labor: building roads, digging ditches, draining swamps, and building railroad tracks. In 1943 they were sent to Skarzysko concentration camp in Kamienna, Poland. Yaksil wrote on his Claims Conference compensation form that he “worked in an ammunition factory making shells for cannons.” The food was practically nonexistent. Yaksil and Isaac were starving, so they would sneak out of the barracks to steal potato peels and vegetable shavings from the guards’ garbage. Isaac would boil them before they ate, but sometimes Yaksil was too hungry to wait and would eat them raw. From Skarzysko-Kamienna the brothers were sent to the Buchenwald concentration camp. They arrived there on August 5, 1944. At Buchenwald, Yaksil was assigned prisoner number 67766. Close to the liberation of Buchenwald, Yaksil and Isaac were transported to Theresienstadt, now in the Czech Republic. Yaksil told his daughter that the Russians liberated him and his brother there. Despite the fact that the Russians had practically no supplies, they called him “Tovarishch (comrade)” and shared the little food they had and treated him like a human being again.

According to Yaksil, after the war, the Czechs were rounding up the Poles and sending them back to Poland because they said they were stealing and were Nazi collaborators. The brothers recorded their birth place as Luxembourg when registering as displaced persons because they did not want to be associated with Poland. Yaksil harbored deep resentment toward the country of his birth. Yaksil returned to Germany and spent some years in displaced persons camps in Landsberg and Bamberg, Germany. Yaksil and Isaac went back to their hometown, Slomniki, to see if any of their relatives had returned. The day they arrived, three Jews were killed in the streets by Poles. They returned to their family home to find everything had been looted by their neighbors.

Yaksil sneaked into Israel on a boat in 1948. He was in the Palmach, the commando branch of the Haganah, for a year and a half and then went to the Sherut Ha-Bitachon Ha-Klali (Israeli Security Service).  He fought in the 1948 War of Independence and was shot in the leg by the Egyptian military while serving in the Sinai desert. As a member of the Palmach, Yaksil also served as an armed guard. One night David Ben-Gurion, Israel’s first prime minister, rode up to his post on a large white horse. Even though Yaksil recognized Ben-Gurion, he still made him recite the password. Ben-Gurion praised Yaksil for doing his job so well and so carefully.

After independence was won for Israel, Yaksil returned to Germany. In 1951, he was sponsored to come to the United States by a Jewish organization and settled in New York City. He and his future wife, Marcia Pierna, met in a Manhattan night school while they were studying English. The couple remained in Manhattan and had two sons, Alexander and Albert, and a daughter, Daisy Ann. Yaksil worked in the garment industry as a cutter and pattern maker with an expertise in plaids. In 1972, the family moved to Long Island.

Yaksil continued to practice Judaism after he came to America and raised his children to practice it as well. In 1993, he visited Yad Vashem in Israel with his wife and daughter. The visit was extremely moving and emotional for the family. Shortly after his retirement at the age of 72, Yaksil passed away unexpectedly. Daisy Ann Lewit spoke of her father as a heroic person with an indomitable spirit. She felt it was her duty to memorialize her father and share his story through the Remember Me? project Website. He is survived by his wife, children, and older brother, who settled in Germany.