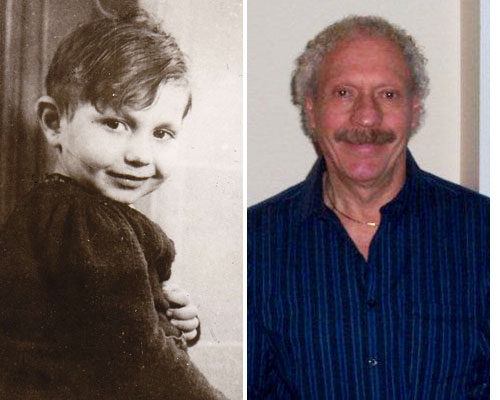 Ami (Emanuel) Levinsky-Kaufman found out about the Remember Me? project through a CBS News story he saw on TV. He then discovered what he thought was his picture on the Remember Me? site under the name “Aimre Levisky.” As a child he was nicknamed Aime, so he thought that his name had been misspelled. At first Ami didn’t know what to make of finding the photo, but then he started digging in his files of old photographs taken in Israel after the war. He compared those photos with the Remember Me? picture and was certain the photo was of him. He was pleasantly surprised because this was the first photograph he had seen of himself in France. Ami has very few memories of his childhood, but he was able to share with us what he learned thanks to research that Catherine Thion at the Centre d'Etude et de Recherche sur les Camps d'Internement du Loiret (CERCIL) had conducted for him a few years ago.

Ami’s parents, Jacob and Lea (neé Kaufman), were originally from Russia. It had always been a dream of theirs to go to Palestine, and they immigrated in the early 1920s. Ami’s older brother, Daniel, was born in Jerusalem in 1926. The family decided to move to France for work and arrived there in September 1928. They resided for some time in Toulouse but later moved to Châlette-sur-Loing (Loiret). They lived near Montargis, where Ami’s father worked as an industrial chemist at the Hutchinson rubber factory.

The persecutions of Ami’s family started in 1940 with the invasion and occupation of France. Jacob was dismissed from his factory position in June 1940 after local authorities ordered the closure of the factory. The German Army declared the factory a “spoil of war” since it actively participated in the national defense. Jacob then found work at a drugstore. From October 1940 until December 1941 Jacob was forced to declare his family as Jewish, register in several Jewish censuses, and make note of his personal possessions. In October 1941 he was required to surrender his radio to the Montargis police. These were all actions taken against Jews in France, but the Levinsky family was specifically targeted because they were foreign Jews.

Ami was born in Montargis on January 14, 1942. In June of that year the Levinsky family complied with the obligatory German-proposed and French-imposed law of wearing the yellow star. That same month, Ami’s father (at the age of 42) and older brother, Dan (at the age of 16), were arrested. They were interned in the camp of Beaune-la-Rolande and deported two days later to Auschwitz on Convoy 5. They arrived in Auschwitz on June 30, 1942, where Jacob was assigned prisoner number 43740 and Dan prisoner number 43741. According to Auschwitz records, Dan died there on August 15, 1942, and Jacob is presumed to have died there as well.

On October 9, 1942, Lea and Ami, then not even a year old, were arrested together and imprisoned in Montargis prison. According to arrest reports Ami was released on October 10 and entrusted to a Mr. Levy who was a delegate of the Union Générale des Israélites de France (UGIF) in Montargis. Lea’s incarceration would continue in Beaune-la-Rolande. She was cared for in the camp infirmary from November 25 until December 8, 1942, and was later hospitalized in the Pithiviers camp hospital. She was eventually discharged and returned to the infirmary at Beaune-la-Rolande, where she likely stayed until her transfer to Drancy on March 23, 1943. She was deported two days later to Sobibor at the age of 42.

Ami recalled that a Catholic priest, Robert Crespin of Châlette, discovered he was in prison and was able to expedite his release due to medical reasons. Father Crespin placed Ami with Mrs. Gorkin, who was a friend of the Levinskys. Her husband and daughter had been deported on the same convoy as Ami’s brother and father. Ami was cared for by Mrs. Gorkin until March 1944, when they were arrested together along with Mrs. Gorkin’s ten-year-old son, Henri. Father Crespin was able to save the two-year-old Ami from certain death for a second time. Ami has no recollection of his years in France, but he was cherished and protected as attested by letters from the social workers, Miss Naillon and Mrs. Chelles, who sheltered him.

After his time in hiding, he was placed in an Oeuvre de Protection des Enfants Juifs (OPEJ) children’s home in Malmaison. This is where the photograph on the Remember Me? site was taken in 1946 when Ami was four years old. His mother’s sister, Doctor Luba Kaufman, arranged for him to join her in Palestine. He immigrated there in 1947. She legally adopted him and Ami’s last name was changed to Kaufman.

Ami grew up in Israel and went to elementary school in Haifa. His aunt Luba died when he was 16 and he went to live with another aunt, Tzipora, in Tel Aviv. He attended an agricultural high school near Haifa with aspirations of becoming a veterinarian. Ami graduated from high school in 1960 and served in the Israeli Army until 1963. A year after that he traveled to the United States for six months to improve his English with the intent of becoming an attorney in Israel. He attended Queens College in New York for special foreign language training. After his training he got a work permit and worked as a camp counselor in upstate New York. Ami reminisced that he learned English from the children there.

After the summer camp, Ami went back to Queens College to continue his studies. He met and married his wife, Nurit, in 1967. They settled in Queens and Ami graduated from Queens College in 1970 with a BA in business. After graduating, he worked for a number of companies, including GE. He worked at Panasonic for 34 years as a purchasing manager and retired in 2006. The Kaufmans adopted a son and named him Daniel after Ami’s brother. Since his retirement, Ami has occasionally done family research. He thinks very highly of the Remember Me? project and feels that it gives him a reason to keep searching. He hopes that through the project he will be able to meet and correspond with other survivors.