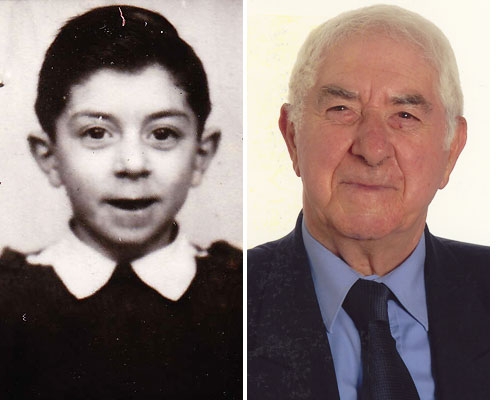 When he saw the photograph of himself as a young boy, Daniel Miszputen was surprised and overcome with emotion. The only photo he knew was one of his sister Josiane. The Remember Me? site features photos of five of six Miszputen children: twin sisters Marinette and Liliane (born on August 30, 1936, at the Hôpital Saint-Antoine in the 12tharrondissement of Paris), Daniel (born on April 19, 1939), Josiane (born on May 1, 1942, and pictured on this page), and Jacqueline (born on October 8,1932, in the 10tharrondissement). An older brother, Mojzesc (later called Maurice), was born on November 2, 1928, in Warsaw, Poland.

Daniel’s parents were married in Poland in a religious ceremony. Both of them were born in ?elechów, Poland. Josek (Joseph) Miszputen was born on November 5, 1904, and his wife, Ita (née Blisko or Blizko), on April 12, 1903. Daniel’s father arrived alone in Paris in 1928 or 1929; he and a partner worked as tailors. Daniel’s mother later joined her husband on a tourist visa. Then, they were able to marry under French civil law in the city hall of the 3rdarrondissement on March 11, 1933.

The couple first found an apartment near the Porte Saint-Denis in Paris before moving to rue des Laitières in Vincennes, and then to rue de Montreuil in the 11tharrondissement. Ita was a housewife. She spoke Yiddish with her husband.

When the war broke out, Ita and the children were on vacation in Mornay-sur-Allier, a commune in the Cher department. They immediately returned to Paris. Daniel’s father’s first reaction was to enlist as a volunteer (Engagé Volontaire) in the Foreign Legion in order to fight for France. Two days after the Armistice, he was wounded and sent to several locations to recover, including Lamalou-les-Bains in the Hérault department where his wife visited him. He later went back to Paris, but could not return to work.

At the beginning of the war, Daniel remained at home because he was too young to go to school. His father was arrested when he went to the local French police department to have his ID papers checked. Neither the fact that he had fought for France and been wounded nor that he had six children prevented him from being arrested. He was sent to Drancy and then deported to Auschwitz aboard Convoy 23 on August 24, 1942.

In 1942, the family went to Pezou, near Vendôme, and remained in the small village of Fontaine. They were hosted by a couple who had children, including one disabled child. Daniel remembers that there were many Jewish children in Pezou at that time. He believes that they ended up there with the help of a Jewish organization, maybe La Mère et l’Enfant (Comité Amelot) or the Union Générale des Israélites de France (UGIF). Daniel and three of his four sisters remained in Pezou while their mother stayed in Paris with Josiane, who was cared for there by a neighbor, Mrs. Maertens. At the end of 1942 or early in 1943, Daniel and his sisters went back to Paris as well and stayed at the UGIF home on rue Lamarck.

Daniel remembers that in 1942, every time there was a roundup, the concierge of the apartment building on rue de Montreuil used to tap the floor with her wooden shoes in order to warn the family that they needed to hide in a tiny closet between the floors of the building.

Daniel also recalls that his brother Mojzesc was in the Catholic Institut Boutiller in Montléry, the head of which Yad Vashem later honored as a Righteous Among the Nations. Daniel and his sisters also went to Montléry to stay with Mrs. Nions (or Nyons) and remained with her until the liberation of France. Daniel recalls that their mother was able to visit them once or twice.

At the end of the war, Daniel was five years old. The siblings joined their mother in Paris where they lived in very poor conditions and were helped by some neighbors. Their apartment was pillaged. After the liberation, their mother stopped working. The children went to school. Daniel said that one day a welfare worker visited the family while Ita was at the Aligre market to try to get some food for her children. Because the children were home alone, the welfare worker wrote a critical report in which she stated that if she did not find the mother at home when she returned at lunchtime, she would recommend taking the children away from her.

Daniel believed they received help from the Oeuvre de Secours aux Enfants (OSE) or perhaps foster parents who provided them with clothes. His brother managed to work for a few months for the Joint Distribution Committee in Paris. Thanks to the Jewish Organization Rue Amelot, Daniel was able to go to summer camp in Berck Plage in the Pas-de-Calais department.

After the war, Daniel went to school on rue Titon in the 11th arrondissement. He left school at 14 and went to the Organisation Reconstruction du Travail (ORT) to learn to be a cabinet maker and to work with wood. He also attended night classes at the famous École Boulle. But working with wood did not please Daniel at all, and he decided to stop. He sold casino coin machines when he was 16 or 17, then until he was 20 he sold household linen going from door to door.

Daniel went to Montléry for his military service before being sent to Vincennes. He was exempted from fighting in Algeria because he was a Pupille de la Nation (a war orphan).

After serving in the army, Daniel met his future wife in Tours and married her in 1963. He started a women’s clothing business in Tours before moving to Poitiers, where the couple opened the same kind of business. Daniel has three children and five grandchildren. He retired in 1993 after opening a textile store in Clermont-Ferrand.

Daniel’s sister Liliane left France for Italy when she was 15. She had fallen in love with a young Italian boy and married him. They had a boy and a girl and had a successful life in Ancona, Italy.

According to Daniel, Marinette was a brilliant person. She worked as a secretary at the prestigious Académie Française in Paris. She had two children.

Mojzesc wore the FFI armband  (Forces Françaises de l’Intérieur) in 1944. He later became a member of the French Communist Party. He left France for Palestine hoping his siblings would join him. But his mother spoke only Yiddish and did not have any money; therefore she refused to go to a new country that was also at war. Mojzesc eventually became an officer in the Israeli Army. Still a Polish citizen, he decided to travel by boat back to Poland. On his way, the boat stopped in Italy where his sister Liliane took him home. Later, Mojzesc went back to Paris. He passed away 15 years ago.

Since he retired, Daniel is very much involved in genealogical research in order to reconstruct his family story. He likes searching the archives. He also volunteers every year in the Israeli Army. Daniel wants to pay tribute to the Jewish organizations that helped him and his family during and after the war.