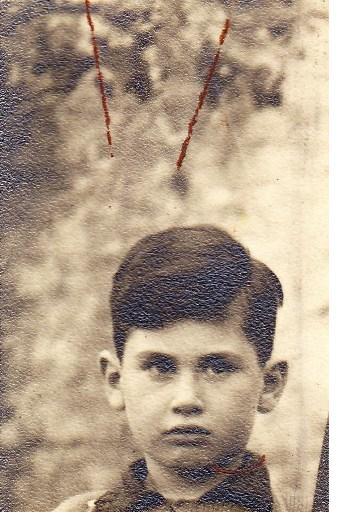 Theodore Meicler was born and lived with his mother, father, and younger brother, Marcel, in Brussels, Belgium. Theodore stayed in several places of hiding during the war. His parents first hid him with a farmer’s family in a small Belgian village. This family soon became frightened by the consequences of hiding a Jewish child, so his parents took him back before 1942. In December 1942 the Gestapo took his father away. Shortly after, Theodore’s mother arranged for herself, Theodore, and Marcel to go into hiding with Gentiles. Each family member was in a different place of hiding in Belgium, and all three survived the war.

Theodore was placed into hiding in a mansion in Lasne. After that he was kept for some time in a Jesuit school where he was isolated from the Christian children. He was then placed into the home of Jeinette Stordeur, a seamstress, whose daughter was a school friend of Theodore’s mother. He stayed with Jeinette until 1945, after liberation. Theodore remembers the Germans fleeing and the British tanks coming in during liberation.

Theodore moved around several times after the war as well. He spent some time in a mansion converted into a children’s home in Aische-en-Refail. He was also in a different location in Lasne. Theodore remembers Sigi Hirsch, one of the caretakers in the children’s home. He also remembers sleeping in bunk beds and attending bonfires at the home.

He stayed in Lasne until 1947 when his grandparents came back from Switzerland. He went to live with his grandparents and was reunited with his mother and brother. He attended school up until the ninth grade in Brussels. From there he was sent to boarding school. At age 15 or 16, Theodore spent a year with his mother’s brother in Paris, and at 17 he immigrated to Israel. He lived on a kibbutz in Israel until 1968 when he moved to Houston, Texas, to join his mother and brother. Theodore started working in an upholstery manufacturing company in 1971 and bought the company several years later. He retired in 2001.